The TOUR Transalp 2022 breaks new ground in many respects. For the mathematicians among racing cyclists, for example, it raises the question: Where have all the kilometres and metres of altitude gone? And indeed, in purely mathematical terms, a clear difference can be seen compared to the editions before. If you compare the pure data with the average of the previous years, you will see that there are around 2000 metres of altitude and 200 kilometres less on the clock. A cinch, right? Not quite, because the Transalp mathematics don't work quite that simple. You can tell yourself that this Transalp is easy if you have to climb 1900 metres in one go from Prad to the Stilfserjoch on the second day. You are welcome to ask mathematics when you are slowly running out of energy on the Mortirolo with maximum wattage, where there is still some energy hidden in the calculation. And feel free to calculate that you've almost made it when another 1600-metre altitude hump builds up in front of you on day six. No, the Transalp maths is not that simple. But it's true: this Transalp is not only one of the new ways, but one of the short distances. It offers full fascination in the smallest possible space - without wasting kilometres that are only there to get further. But it also breaks new ground in real terms, because there is a new starting point at Lake Reschen - with a special ambience at the sunken tower in Graun, which has become a cult. And there is another, completely new stage location, Castione della Presolana, at the gates of Bergamo. This offers the opportunity to explore a region where the Transalp has never poached before. And as the icing on the cake, a spectacular pass leads into this new region, the Passo Vivione, which is one of the highlights of this new route. So: forget pure mathematics: this Transalp is a concentrated load that will leave an impression: with postcard landscapes that whiz by as if in a film, and extravagant pass roads that you would want to love, but probably rather curse when you have to crank them up. Pleasure and frustration, sweat and adrenaline, lows and highs: Once again, the Transalp 2022 has it all. 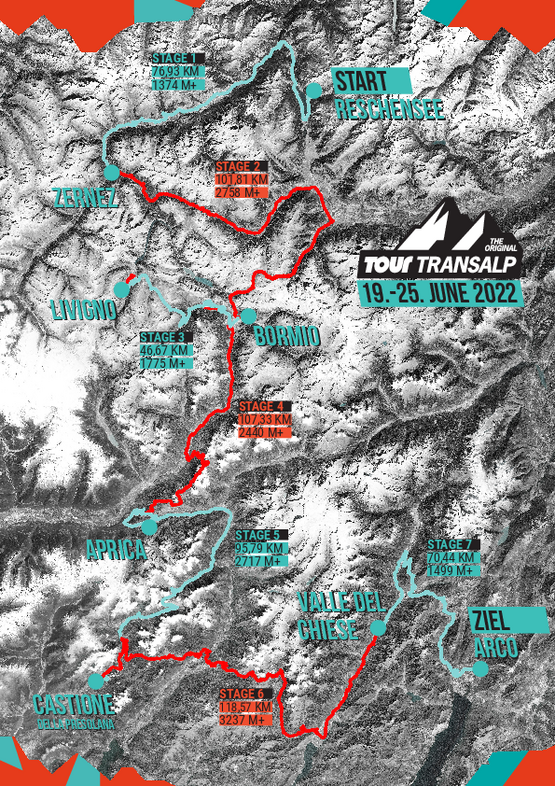